The juxtaposition of the traditional against the forbidden in Alvin’s sensually charged sweets is a concept and emotion not wasted on Bart Bland, a curator at the Hudson River Museum in Yonkers, N.Y., which recently exhibited “I Want Candy: The Sweet Stuff in American Art.” In a description of the exhibition, he points out that the “easy-going decadence” seen in many of the candy works of contemporary artists in the exhibition was rarely seen in 19th-century still life, perhaps because people felt “uncomfortable with the sensual, visual and gustatory pleasures of sugar.”

But after World War II and the explosion of consumerism, Bland says artists looked at food in jaded ways, a la Andy Warhol, or clinical ways, a la Wayne Thiebaud. “There are a lot of political and sexual overtones with candy,” he explains. “With young artists, I see them gravitating toward food to explore body issues. There’s also a lot of regression to childhood in the pieces. An exploration of childhood and what’s forbidden.

“If they were to retell biblical stories today, it would have to be a candied apple,” Bland continues. “Fruit is just too wholesome.”

And yet, fruit remains a popular food subject for both artists and collectors.

Growing up in the Ukraine, life was tough for artist Alyona Nickelsen. “I learned to appreciate everything I have, including food,” she says. “I am trying to bring that value to what people have. I value what I see. I see joy in food with the light that hits it. There is beauty in everyday life.”

Nickelsen, who now lives in southern California, started creating fruit still lifes in 2004 with a pear image that was eventually featured in 15 national shows and garnered multiple awards. What’s the attraction? “Sometimes when people look at artwork, they see something very familiar, and they also look at a picture and would never think pears could look like this,” Nickelsen explains. “When you eat food, and it’s tasty, your system is on an animalistic level; you feel pleasure. Visually, the artwork reminds you of the pleasure you felt before on the primitive level of humanity.”

Some might say when you look at the pictures, you can almost taste them. 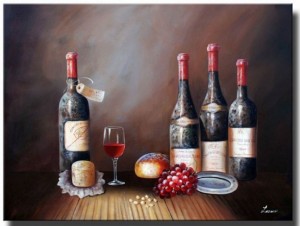 For artists who paint wine, the feelings are similar. In fact, New York artist Michelle Marie, whose “Chateau Latour” is the only wine painting she’s ever created, is so attached to her painting and the memories it evokes, she can’t bear to part with it. Marie says she “wanted to immortalize and capture” a bottle of the 1966 vintage, which she shared with her husband. Painted in her expressionistic style, her goal was “to depict subjective emotions and responses that the object arouses.”

“For me, this comes through distortion and fantasy,” the artist explains. “I want to portray my own sensibility to the world’s reality.”

However, Marie, a serious wine collector herself, says interest in the painting has caused her to think about creating more wine imagery. “Each wine bottle in a collection is a future memory,” she says. “I think I could awaken this particular subject and revisit it. Wine is such a big part of our lives.”

Many collectors feel the same way. “People celebrate with a bottle of wine, then come into the gallery and see that wine in one of the works,” says Ashley Mattila, co-owner of Marcus Ashley Gallery in South Lake Tahoe, Calif. The gallery carries the originals and fine-art reproductions of Thomas Easley, an artist who generally incorporates food or other still-life elements with wine.

“Clients hang his artwork in many different places in the house,” Mattila says. “Not just the dining room, but the bedroom and above the fireplace mantel.” Collectors are primarily wine drinkers, Mattila maintains, and many have four or five Easley paintings and are still looking for more.

Easley, now a wine collector himself, started painting wine in 1997 after several years of painting hyper-realistic still lifes that he says earned him the nickname “Mr. Xerox.” Easley did not take it as a compliment and strived to instill more “life” in his work through impressionism. His work in wine and still life now combines abstract, impressionism and realism, primarily in the label. He calls it extreme impressionism.

Although many collectors are attracted to his wine pieces, and some even commission him to paint a particular bottle or vintage, Easley says some people don’t even know what wines are shown in the paintings. “The painting is not represented by the bottle,” he explains. “The bottle is often secondary to the still life.” 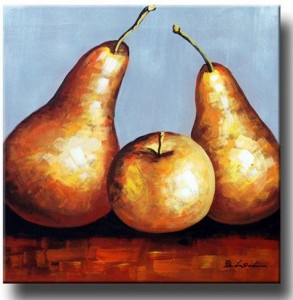 This is also the case in the work of Susan Hoehn, an artist who is known for her vibrant landscapes, but who also incorporates wine and food into many of the wine-country scenes she paints.

Still others, like artist Raymond Campbell, strive for pure realism in the food, wine and antiques they portray. According to Vicki Arnot of Herbert Arnot Inc., a company that represents Campbell’s original oil paintings in the United States, “Campbell reaches out to other wine connoisseurs who can appreciate the authentic nature of what the artist is painting in his ‘Trompe l’Oeuil’ or ‘to-fool-the-eye’ paintings. On the back of each of his paintings, Campbell indicates the actual vintage of each of the bottles portrayed. He actually owns these wines, and so he is able to properly portray them on panel and understand the depth of each of the wines in his paintings.” The technique is definitely something his collectors, who also tend to be wine collectors, appreciate.